The Minister for Foreign Affairs and Trade, Charlie Flanagan T.D., convened a meeting of the Export Trade Council on Tuesday, 26th January. It was the last meeting of the Council under the current Government and the Minister took the opportunity to thank everyone for their contribution to the Council since it was established in 2011; his fellow Ministers, senior Departmental officials, the heads of the Agencies and the private sector members.

The infographic (see below) was prepared for the Council by Declan Hughes of the Strategic Policy Division of the Department of Enterprise, Jobs and Innovation.  It, along with his crystalline presentation to the Council, illustrated the huge success in meeting and exceeding the targets set out in the Government Trade, Tourism and Investment Strategy.  There was however no mood of complacency, with a focus on anticipating challenges and risks ahead.

At plenary session of the meeting, the private sector members’ paper on Competitiveness and Growth was presented by Caroline Keeling of Keelings,  an Irish family owned company specializing in producing fresh produce and the technology that goes with large scale food production.  Caroline’s presentation generated a very energised discussion between private sector members and the Minister for Jobs, Enterprise and Innovation, Richard Bruton T.D., of risks and how to mitigate them. Topics discussed included competitiveness and costs arising from such factors as insurance and housing; currency fluctuations, especially the euro vis-à-vis the dollar and sterling; the prospect of global interest rate rises, now that the US had gone ahead on this; the supply of critical skills; fluctuating demand in key markets; the impact of sanctions on Russia on our agri-business trade there; the challenges and opportunities of the TTIP (TransAtlantic Trade and Investment Partnership) and a completion of the Doha Round of the WTO trade negotiations; maintaining our comparative advantages in the highly competitive contest for international investment; and the uncertainties of Brexit.

Council members agreed that mitigation lies in acknowledging these and dealing with them when you can; market diversification; deepening awareness of Brand Ireland globally; fostering native entrepreneurship and meeting critical skills gaps; completing the single EU market; the full exploitation of all opportunities for Irish business aboard; and of course effective coordination.

One area of notable interest that arose in discussion was the all-island economy, the progress bench-marked by the North-South Ministerial Council, the effectiveness of Tourism Ireland and the potential for mutually beneficial synergies. The over-riding objective was a point of consensus within the Council, namely economic resilience in an uncertain global economy.

Minister of State Aodhán Ó Ríordáin addressed the Council on the coordination of cultural promotion and Ministerial overseas travel. Minister Ó Ríordáin emphasised the importance of cultural promotion in its own right, not just as an add-on to trade missions. The year 2016 would be particularly important in this regard and offer plenty of opportunities for the promotion of Irish arts and culture.

An important item on the agenda was the impact of the EU on Irish business. Our Ambassador to the EU, Declan Kelleher, and our Deputy there, Ambassador Tom Hanney, joined the Council to offer their insights on this critical and often underestimated area.

In his commanding overview, Declan noted the shifts he had detected within the EU since his previous posting there, including the growing significance of the European Parliament, the strength of lobbyists, the emergence of German leadership, the shift to the east, and the fact that Ireland, as a now net contributor to the EU, should seek to assert its influence in all spheres of EU activity.

In terms of Irish business, Declan pointed to a number of critical trade negotiations that lie ahead, including TTIP, Mercosur (the big two being Brazil and Argentina), and China’s market economy status within the WTO. The Data Protection issue will have huge implications for business and privacy. In terms of financial services, the 2008 crisis had given rise to some forty pieces of legislation but Declan noted that their implementation is now viewed from the perspective of generating growth, creating jobs and protecting both SMEs and individuals. The Capital Markets Union offers Irish SMEs in particular huge opportunities and its emergence deserves serious attention, he said.

Ambassador Tom Hanney noted that the current climate negotiations on carbon reduction would have a huge and pervasive impact on our behaviour as businesses, households and individuals. Those negotiations are zero sum and they will therefore be tough and highly consequential for Ireland. Tom gave insights into EU business regulation and the scale of the impact of the single digital market. Tom offered an important message to the Council; any businesses impacted by EU regulation should call on our Mission in Brussels and let them know. They were keen to listen and to help. Both Declan and Tom commended the work of the IBEC office in Brussels and the strength of their working relationship with them.

Minister Flanagan, as chair, adjourned this last meeting of the Council but invited the members to a working dinner to review the body’s performance and future direction. He noted that the Council has proven to be a very strong platform for the coordination of our collective efforts in advancing Irish trade overseas. Given the mix of members, it had evolved as a body with a clear sense of identity, common purpose and functions. The Minister chaired a discussion on the future direction of the Council, building on the consultations that I and my colleague, the Council’s Secretary, Keith McBean had been having with the private sector members. The discussion revealed deep agreement on the Council’s added value and a sense too that its direction of travel was correct, namely a focus on ever more effective coordination, a keen and dynamic awareness of economic risks and bottlenecks, and a willingness to openly exchange views on what needs to be done and then following up on delivery.

Keith is departing in the summer to be Ireland’s Ambassador to the Council of Europe at Strasbourg. The Minister and Council members commended his outstanding performance as Secretary. I would like to add my own thanks to him and the team for his leadership on this initiative. And indeed I would add my thanks to the work of my predecessor as DG Trade Division, Colm Ó Floinn, now Ambassador to Finland, who guided the formative years of the Council and helped create it as a new and essential forum for strategy and implementation.

Department of Foreign Affairs and Trade 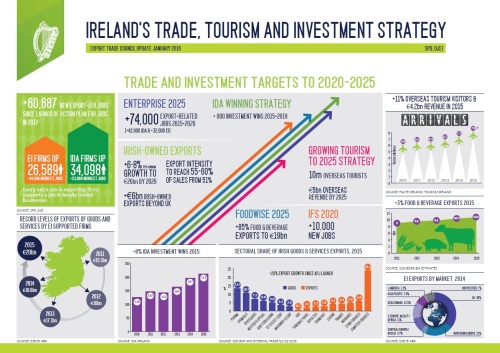